YouTube has always given anyone that posts videos the ability to create a table of contents that can be used by the viewer to jump to certain parts of the video. For example, in Bernadette’s video the main theme is Focal Laser Ablation (FLA) but if you were to approach this presentation saying to yourself that I am not interested in FLA you would miss a really good conversation about biopsies, the use of MRI to help diagnose prostate cancer and Genomic Testing just to mention a few subjects.
The way this works is that you click on the following link:

This will take you to Bernadette’s video on YouTube. If this is the first time you have viewed this video you will be presented with the following . You should see the “Table of Contents - TOC” (indicated by the Purple Arrow) and the “Show More” button (indicated by the Red Arrow”). 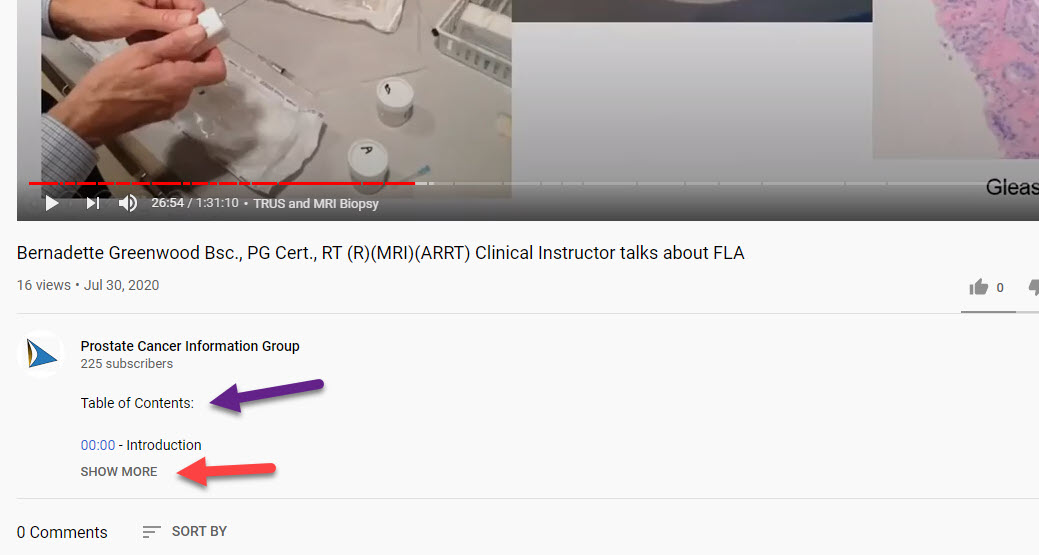 To view the TOC, click on the “Show More” button and the following will appear.

As an example, say you are looking over the TOC and you want to see what Bernadette has to say about Biopsies so you would click on “04:38” (indicated by the Red Arrow) which is 4 minutes 30 seconds into the presentation. The video in the viewer would change to the start of the section on “History of Biopsy”.

Now comes the cool part of how YouTube is allowing you to spend less time moving all over trying to find something you thought you saw and jump directly to the part you are interested in. If you take your cursor and move it to the bottom part of the Viewer the Start/Stop button, Volume control, and the Timeline appears. 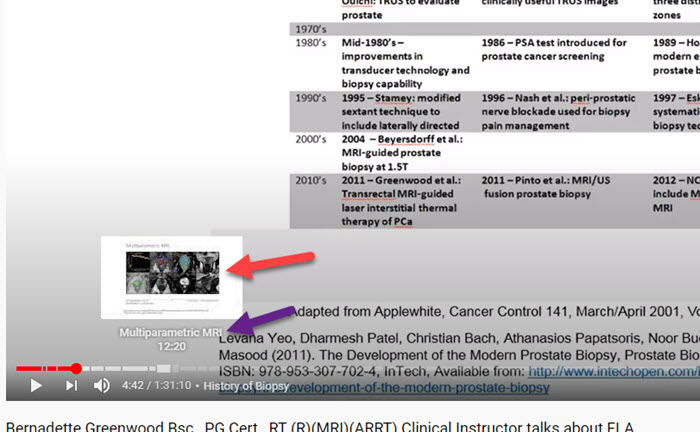 The current position is indicated by the red line with a dot. If you move your cursor along the line you will see that an image of what is on the video at a particular point on the timeline and includes the information that was shown in the TOC. For a company that would much prefer that you start a video and watch it from start to finish, YouTube has given us this time saving feature.