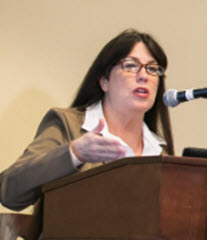 Jan Manarite is currently the Executive Vice President of ABC's, where she works alongside CEO Joel Nowak, a survivor of 5 primary cancers. Jan is the wife/caregiver/advocate and widow of Dominic Manarite, a PC patient who was diagnosed with a PSA that was over 7,000, with bone mets everywhere, including his skull.  When Dominic was diagnosed, their son was only 9 years old.  Jan became his advocate immediately, and found help with PCRI in Los Angeles, who eventually hired her, where she worked for over a decade.  In advocating for her husband, including choosing many of his treatments, he lived for an unexpected 13 years, losing his battle in 2013.  Jan has led many, many projects, and conferences and worked with many patients to help them work through their journey with more accurate information, both about their own personal prostate cancer, and about what to ask their physicians.  She often says "Better questions will get you better answers".  Here extensive writings and projects can be found on her LinkedIn profile, or just by searching the internet or clicking on the following.